by saadmin
in Southern Africa
0 0
0

The growing number of dangerously worn second-hand tyres being sold to the consumer by unscrupulous operators, is becoming a grave concern. Key industry players are, once again, calling on tyre dealers to ‘do their duty’ by ensuring that all scrap tyres leaving their premises have been mutilated, so they cannot be resold to the market. But why the resistance?

Download this story and more in the lates SA Treads Magazine 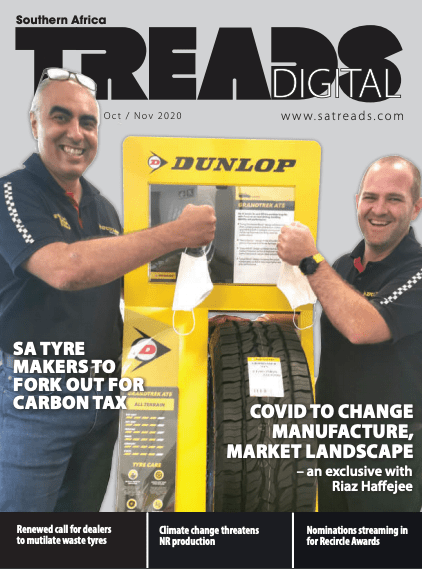 Although the law clearly states that mutilation is the dealers’ responsibility, it would appear a vast number of retailers are simply refusing to undertake this task, with many attributing it to a lack of time and/or resources. “For many years, particularly prethe previous waste tyre management organisation, tyre dealers were obliged to dispose of their waste themselves, but this was seen as a chore and a cost absorbing nuisance, so when the ‘scrap’ tyre dealers would make regular calls to collect and even pay for the re-usable casings, this was one less headache they had to contend with. In short, it was considered a massive help in the management of the business.

That being said, no scrap tyre collector would want to collect a mutilated tyre that they could not resell, as this would be a violation of their business model. Regrettably this arrangement was never in favour of the environment, with scrap tyres ending up either in the solid waste sites (landfills), or merely discarded wherever, leading to the massive legacy stockpile in South Africa”, explains Hedley Judd National Director TEPA.

Under the Waste Tyre Regulations and the apparent implementation of the then-designated waste management company, many of these scrap tyre collectors registered as transporters, while others believed this was not necessary, based on the fact that they had their established client bases. Those that did register were quickly disillusioned by the poor level of remuneration for their efforts, not to mention the delayed payments to them, thereby reverting to their old ways. Those who never registered merely continued as they had always done, which was to clear away the scrap in place for a nominal rate used for casings.

According to Judd, another serious problem emerged at this time, with waste depots being noted on several occasions for selling second hand tyres directly to the public as well. The net effect of this unsavoury practice was that the transporters then refused to collect mutilated tyres from the dealers as they were deemed ‘of no value’ by the depots. “People have long memories and change does not take place overnight, so the residual effects of all these factors combined, have led to a ‘not my problem, or my interest’ mentality,” adds Judd.

To add to this, dealers say there has been no effort made to equip them with any form of a suitable tool with which to perform the mutilation, (given the inherent safety risks associated with the cutting of a tyre). What’s more, there has been no effort from the previous waste management company and now the Waste Bureau, to manage, regulate or control onboard the transporters’ vehicles, the implication being that transporters should not be allowed to convey any tyres that have not been mutilated. The effect of this would be to drive the need for mutilation into the industry, at the point where it is needed.

“It stands to reason,” says Judd, “that if a dealer’s scrap is not removed because it is not mutilated, then the dealer would certainly be compelled to implement mutilation procedures in their operation.” As if this were not enough, the prolific import volumes of second hand tyres, supposedly meant for ‘retreading’ has led to the birth of a whole new second hand tyre industry, one that is blatant and uncontrolled. At the same time, new tyre dealers are facing an unfair and unjust uneven playing field when it comes to costs, margins, turnovers and governance.

More important, the unsuspecting consumer who may be unaware of the dangers of driving on unlawful tyres, takes the full brunt of these illicit practices in the market.

No Result
View All Result

Are you sure want to cancel subscription?